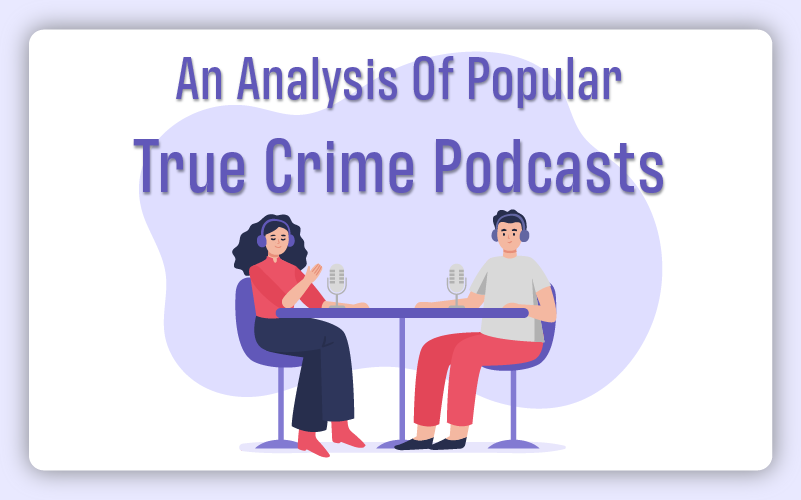 Podcasts have become a ubiquitous part of our lives, with people around the world regularly listening to shows from their favorite entertainers as soon as the newest episode is released. One topic that has proven to be particularly popular among listeners is true crime. Some of the most popular true-crime podcasts have amassed huge fanbases of people who are enthralled by stories of real-life murder and mayhem and want to know every little detail, even the gory ones (and there are plenty of those).

Here at CaseFleet, we understand how these fandoms gain popularity because we’re fans ourselves! Working in the world of law, it’s hard not to get hooked by the many fascinating stories that can be found in the world of true crime. Beyond that, our software helps lawyers manage their cases and build out narrative-style timelines of events, and is sometimes used for the exact kinds of cases that might wind up as the focus of a podcast episode.

With all of that in mind, we wanted to take a deeper look at some of the most popular true-crime podcasts. We looked at Apple’s True Crime charts and decided to compare and contrast four of the mainstays of the genre: My Favorite Murder, Criminal, Crime Junkies, and Sword and Scale. We collected data on the specific stories covered on the podcasts, general themes of the crimes committed, when the stories occurred, whether the case had been solved or not, and more. We did this for every episode of each podcast that had aired through May 18, 2020, and then compared and contrasted our findings. Read on for our full findings!

Each of the four podcasts we evaluated have produced over 115 episodes each, and the quartet have over 600 combined. That’s a lot of true crime podcasting, covering hundreds of different stories. With that kind of range, it is inevitable that there would be some overlap, and our team found 30 different stories that were featured on at least two of the four.

We created the four-way Venn diagram above to illustrate these connections. The strongest overlap occurred between My Favorite Murder and Crime Junkies with 16 different stories being featured on both pods. In fact, MFM shares at least five stories with every other podcast. No stories were covered on all four podcasts, but The Disappearance of Johnny Gosch has been featured in episodes of My Favorite Murder, Criminal, and Sword And Scale, making it the only true-crime tale to make it onto three of the shows in our analysis.

We also wanted to present some data on the combined bulk of the stories covered in these four popular podcasts. We found that nearly one-third of all episodes featured an unsolved case, while stories featuring serial killers make up less than one in five episodes across the four pods. Given the outsize role serial killers have in general pop culture discussions of true crime, it was interesting to see that for every serial killer podcast episode these shows produced four that weren’t about serial murder.
We also broke down the percentage of male and female suspects featured in these stories and found that 82% of the crimes were committed by men. Finally, we looked at how many stories occurred in different decades and found that across all four shows there is a general bias towards more recent events, with the highest percentage of crimes being from the 2010s and steadily decreasing by decade down to the 1940s.

We also made similar graphics for each individual podcast, focusing on specific themes, crimes, or other quirks that differentiate these pods. In the case of My Favorite Murder, that involved taking into consideration the fact that each episode features two stories, one from each of the hilarious hosts, Karen Kilgariff and Georgia Hardstark. For that reason, we changed the wording of the MFM graphic to reflect that their percentages were based on the total number of stories told on the podcast, not just the number of episodes. 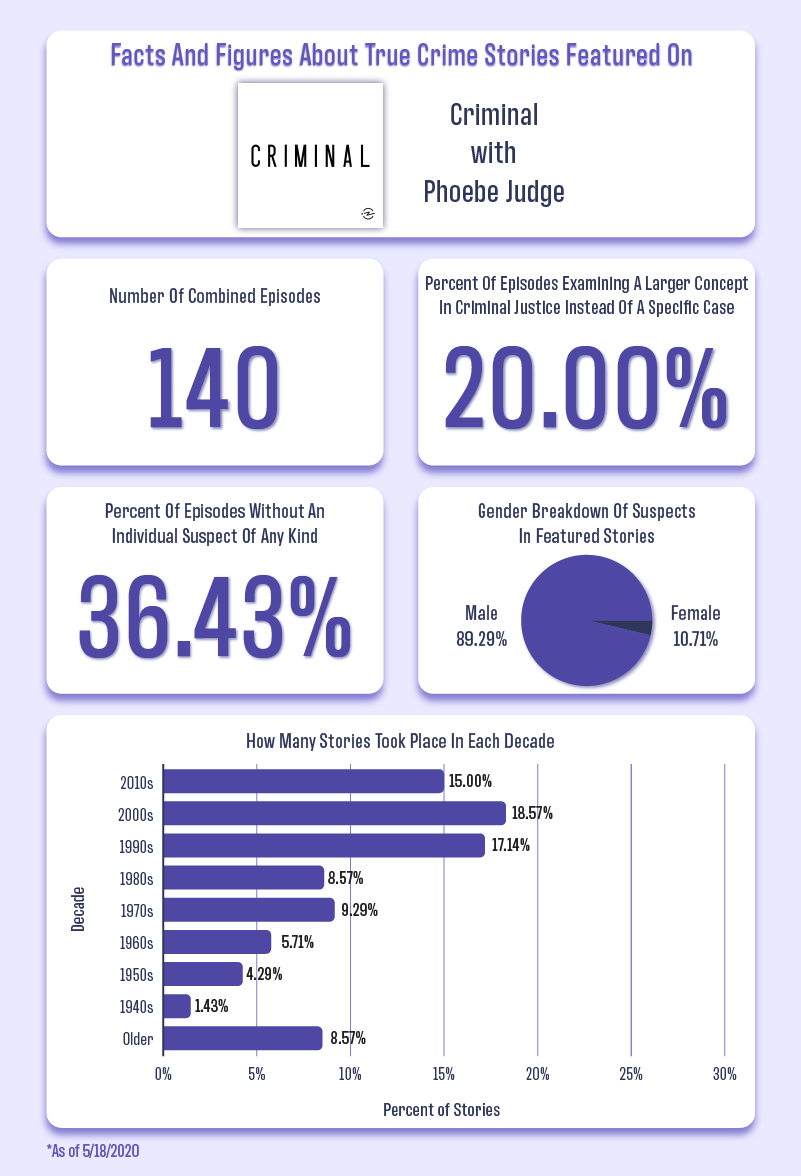 Criminal, hosted by Phoebe Judge, is a podcast that is very well-respected in the true crime world, and for good reason. The show is able to cover specific true crime stories as well as more generalized criminal concepts and phenomena equally well. 20% of all Criminal episodes explore a general concept or aspect of crime, including episodes examining how police handle transgender suspects, what life is like in minimum-security prison, how crime is covered in the media, and more. Related to this focus on more amorphous subjects, we found that over 36% of the stories featured on Criminal do not include a traditional suspect of any kind, giving the show a very unique approach to true-crime podcasting. 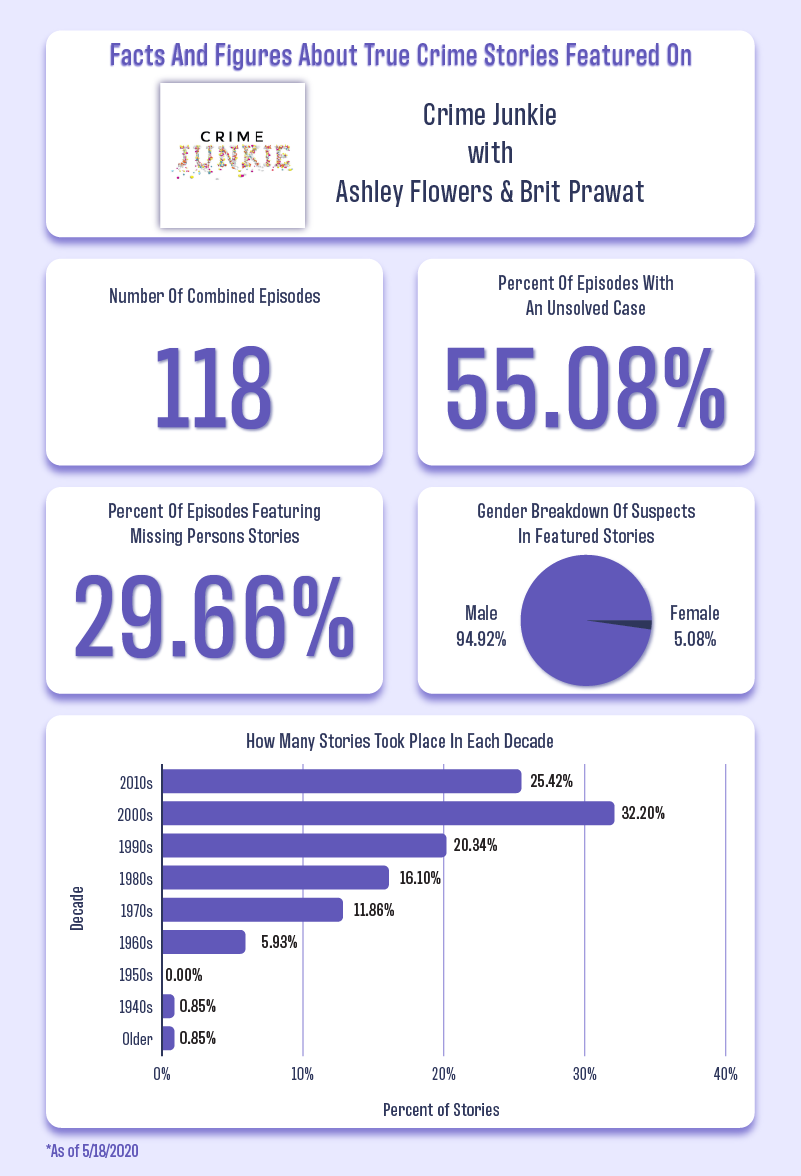 While Criminal frequently features stories where there isn’t a suspect, Crime Junkie and hosts Ashley Flowers and Brit Prawat tend to focus on stories where there is a suspect, but nobody has any clue who they are. A whopping 55% of their podcast episodes feature unsolved cases, meaning more often than not listeners, are left without closure regarding the story they just heard.

Two other data points jumped out to us here, the first being that of the cases where there is a named suspect, nearly 95% of them are men, the highest percentage of any podcast in our analysis. The second is that Crime Junkie features stories about missing persons nearly 30% of the time, the highest rate of any of the four podcasts. This gives extra context to the fact that 55% of cases on the show are unsolved and also makes us hope that the extra exposure the show provides these cases can help solve them.

Finally, we looked at Sword and Scale, hosted by Mike Boudet. This podcast is known to be a bit more intense compared to the others in our evaluation, as the show will frequently feature chilling real-life audio from 911 calls, jailhouse interrogations, and courtroom proceedings, allowing listeners to feel a more personal connection to the crimes and criminals featured on the show. Sword and Scale is also the podcast most focused on telling stories with a firm ending, as less than 5% of episodes feature an unsolved case, the lowest rate of any of our four podcasts. It is also the pod with the greatest emphasis on the recent past, with over 50% of the 129 episodes covering crimes committed in the 2010s.

If you’re like us, this analysis has probably got you itching to fire up your favorite podcast app and dive into the hundreds of true crime tales these chart-topping shows have covered. Whether it be a longtime favorite or a new show you discovered through this post, we hope you get your true-crime fix. And if you are a lawyer, journalist, or even a true-crime podcast host who needs to manage the details and timeline of a case you are working on, don’t forget to check out the solutions CaseFleet has available for just such a situation!